Have you ever wondered how different animals see their environments? Try out this depth perception exercise to test your vision and see what another animal might be able to visualize. Center your nose over the eye below and then focus your eyes on the image of the brown eye. 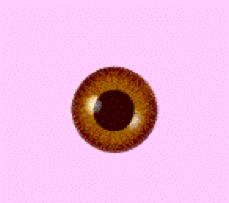 While focusing, place your thumb in front of your nose. You should see the brown eye clearly in the middle between two images of your thumb like the image shown below. 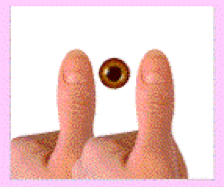 If instead you focus on your thumb you should see two eyes framing one thumb like the image shown below. 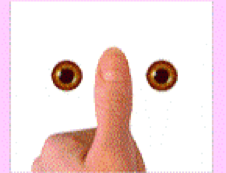 If you got the same results as the ones shown above then that is an indicator of having good binocular/stereo vision. If you are having trouble with this short vision test, it could be for many reasons.

If you wear contact lenses, try the test both with and without the lenses. If you are still not getting the expected result and either you can only see one finger, or one finger is easier to see than the other, or your fingers appear and disappear, this could mean that one eye is more dominant over the other and with practice, you can learn to control your eyes better.

As you know, everything we do, whether it be driving, or texting is dependent on our eyes. The eyes allow us to connect to the world around us and help us survive in our respective environments. According to the scientific article “Why do Animals have Pupils of Different Shapes” by Martin Banks, William Sprague, Jürgen Schmoll, Jared Parnell, and Gordon D. Love, the differently shaped pupils of animals tell us a lot about their foraging activity, what time of the day they are active, and their ecological niche. They found that most predators have vertically elongated shaped pupils while most prey animals have horizontally shaped pupils. Also, if an animal is closer to the ground, it is more likely to have vertically slit pupils to help it focus better on its prey.

As seen above, the cat has a vertical slit pupil to catch its prey and because it is closer to the ground compared to the goat in the middle picture which has horizontally slit pupils. The goat is usually subjected to predation by dogs, lions and other animals. Humans on the other hand have round pupils which helps us see better and survive.

You can see how stereopsis works in vertically elongated animals by examining the results of your own depth perception test. Not everyone that performs this test will have the same results as you did. Even though human beings exhibit depth perception, our depth perception is nothing compared to that of an animal with vertically slit pupils such as a snake. If a snake were to perform the depth perception test above, their results would be similar and most likely more consistent to the results of a human because of how much they rely on their depth perception to help them focus. However, if a sheep with horizontally elongated pupils were to perform the same test, they would always be faced with a problem, because most animals with horizontally elongated pupils are monocular, which means both eyes are used separately. Having monocular vision for these animals isn’t a detriment to them, this actually helps them survive by having a visual of everything around them due to their panoramic view.

In the podcast below, researcher Martin Banks gives more insight into how the vertical shaped pupil helps animals see and survive in their environment. 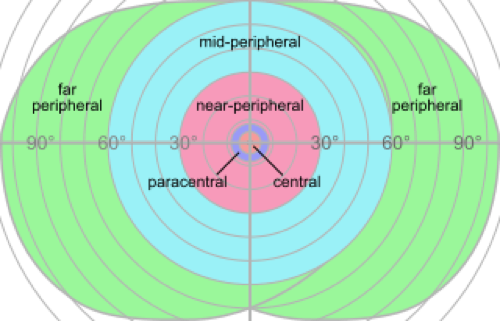 When looking at animals with vertically elongated pupils, their peripheral vision angle would be considerably less than that of sheep and slightly less than that of humans depending on the type of vertically elongated pupils. Animals with circular pupils, such as lions, should have at least 70 degrees of vision in each eye identical to humans who also have circular pupils. Animals with vertically slit pupils, such as snakes, are adapted in ways that allow them to focus on the prey in front of them; therefore their peripheral vision angle will be less than 70 degrees.